I have been enjoying disc golf for about 3 years now, ever since I was talking with a few friends and realized that a handful of us all enjoyed playing. I usually get out about once a week to play with a friend or two over lunch or on a nice weekend afternoon.

Everyone in my family also enjoys playing disc golf, from my 3 year old Ruthie, to my 13 year old son (and of course Kelly). What is nice about disc golf for them is that really anyone can pick up a disc and start playing.

Recently we saw a couple of portable disc golf baskets when we were in a Gotta Go Gotta Throw (a local disc golf shop in Golen Valley off 169). I didnâ€™t even realize that they made portable baskets. This got Kelly and I thinking â€œIf we got a basket, this could be a great camping game!â€.

First, an Intro To Disc Golf

Disc Golf is played just like regular golf. There is a tee box and instead of a hole, you try to get your disc into a basket in as few throws as possible. Now this sounds really simple, which it can be, but disc golf gets every bit as deep as real golf. There are driving discs for throwing long distances, medium range discs and putter discs. Beyond the distances of each disc, different discs also have different characteristics of which way they will curve when thrown, will they roll if thrown right and much more. So if someone wants to get seriously into disc golf, it is a sport that can easily become very interesting and fun. The Twin Cities area has some of the best courses in the country as well (over 41 courses within 20 miles of Minneapolis!).

Is It A Good Camping Game?

For camping disc golf turned out to be a great game. During our recent stay at Baker Park in Medina, MN, Disc Golf was our families favorite game to play! Kelly, Keegan and I played the most, but Mikaela, Ruth, Jadis and Isaiah all had fun throwing discs as well. However, we did make up some different games that worked better with just one basket and limited space. 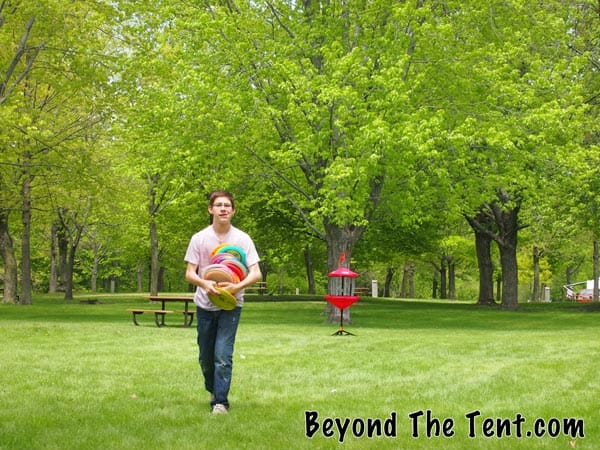 One game we played was Disc Golf P-I-G. We played pretty much like you would play PIG if you were using a basketball. Once difference we did was to give everyone two discs and two shots for each turn. This seemed to make the game more interesting since making a shot with a disc is quite a bit harder than shooting a free throw or three pointer. So you get two throws no matter if you are shooting without any pressure or two throws even if the person in front of you just made a shot.

The other game we played was just regular disc golf, only we didnâ€™t use drivers. We set the basket anywhere from 100-200 feet away and used mid-range discs and putters. This just helped keep our throws a little more under control and didnâ€™t send any long throws into other peoples campsites. The goal of this game was to make your disc into the basket in fewer shots than your competitors. We usually kept the basket in one spot and moved our starting position. 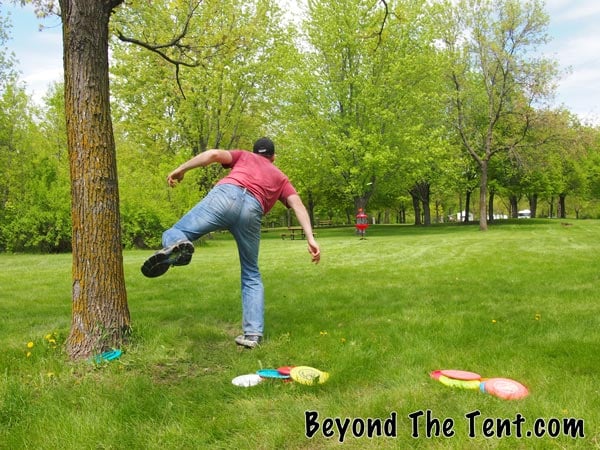 Other than playing these two games, each one of us had a fun time just killing 20-30 minutes at a time practicing our shooting (or trying to make riculously long shots). A lot of parks have big open play areas as did baker. So a couple of times we took our basket to the open park and were able to do some bigger throws which was a lot of fun.

The basket we were using was the Innova Skill Shot which retails for $141.07. This basket is a bit smaller than the baskets you would find in the actual disc golf courses, but it folds up really nice into a small bag that would fit in the trunk or backseat of any car. It sets up easily in less than 60 seconds and folds down and packs up in about the same. Altogether, the Innova Skill Shot weighs only 26 pounds. 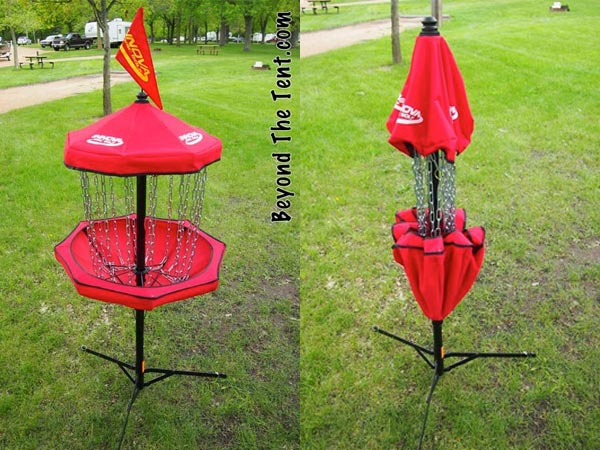 My family and I really loved playing disc golf this weekend while camping. I think it is a great camping game/activity. While $140 is a good chunk of money to spend, the Innova Skill Shot seems to made with really high quality, nothing about it seems cheap or flimsy. I would expect this basket to last many years and lots of fun times. 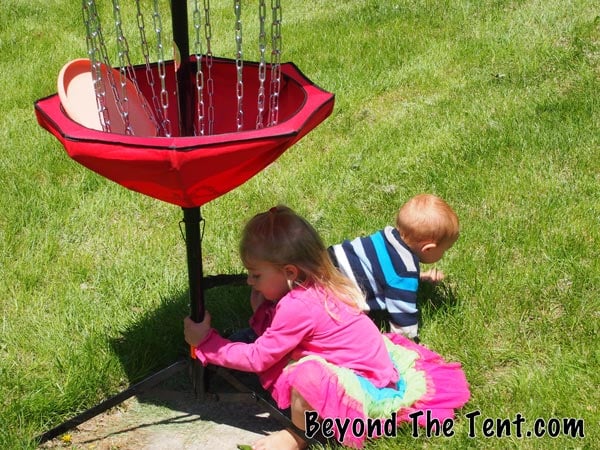 Top 25 Tips For Tent Camping - Beyond The Tent

[…] board games. Unlike at home you have the time to sit down and play. We like to pack our portable disc golf basket and discs when we are camping. It can be a really fun way to pass the time. The state parks […]